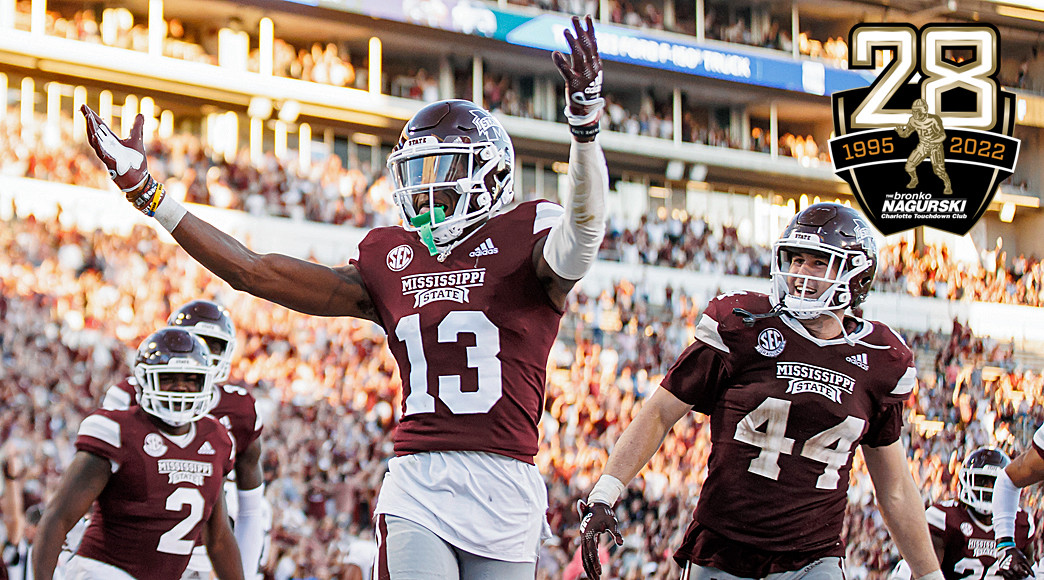 DALLAS (FWAA) – Cornerback Emmanuel Forbes intercepted two passes in the fourth quarter Saturday, taking the second one back 33 yards for a touchdown to seal Mississippi State’s 42-24 win over No. 17 Texas A&M. For setting the school record with his fourth career pick-six, Forbes earned the Bronko Nagurski National Defensive Player of the Week honor for games during the weekend of Oct. 1, as selected by the Football Writers Association of America.

Forbes, a 6-0, 180-pound junior from Grenada, Miss., is the FBS’ active leader in career interceptions returned for touchdowns. His 10th and 11th career picks – the 11 picks are the most in the FBS since 2020 – came on consecutive Texas A&M possessions in the middle of the final quarter right after the teams had traded touchdowns on four previous possessions. The pick-six was the Bulldogs’ final touchdown that provided a 42-17 lead.

This is the fourth time for a Mississippi State player to earn the weekly Bronko Nagurski award and the first since Montez Sweat earned it the week of Oct. 6, 2018. Chris White (2010) and Quinton Culberson (2006) are other past weekly winners.

It’s the second time in his career in which Forbes, a Freshman All-SEC selection in 2020, has intercepted multiple passes in a game and his pick-six broke the school’s career mark previously shared with Johnthan Banks, Corey Broomfield and Derek Pegues. As a team, MSU has intercepted 52 passes in its last 54 games.

Forbes also blocked a Texas A&M field goal – the first block of his career – that created a 50-yard scoop-and-score touchdown and a 21-3 lead in the third quarter. He also broke up one pass and added one tackle in the game.

Mississippi State, off to its best start since going 5-0 in 2014, hosts Arkansas at 11 a.m. CT Saturday on the SEC Network. The Bulldogs moved into the both national polls this week at No. 23.