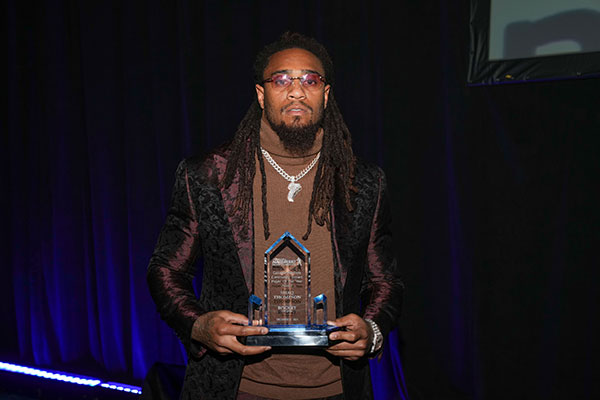 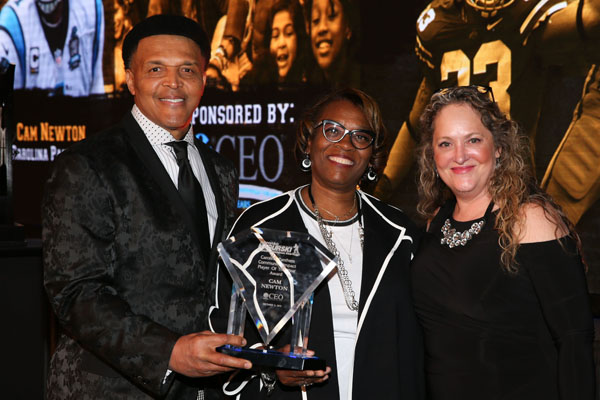 Cecil and Jackie Newton with the President of CEO, Inc. Debby Millhouse 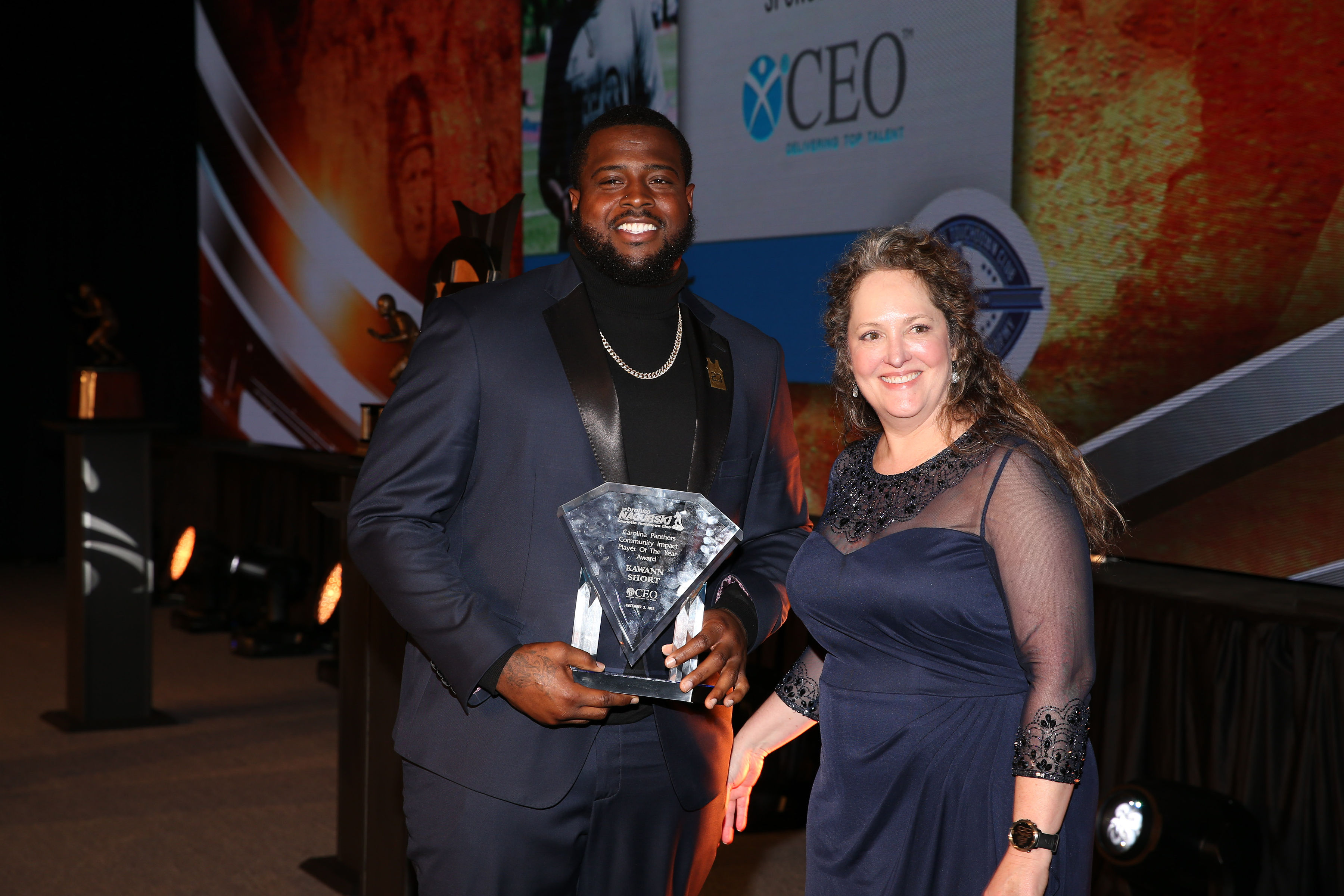 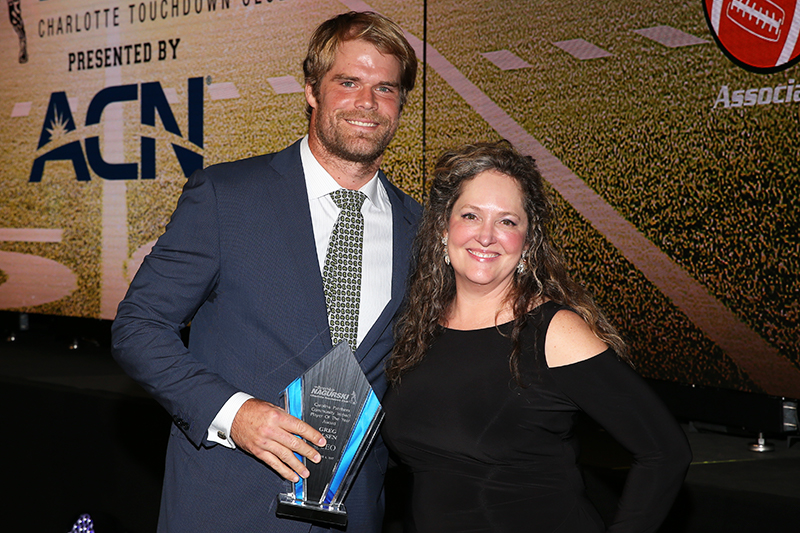 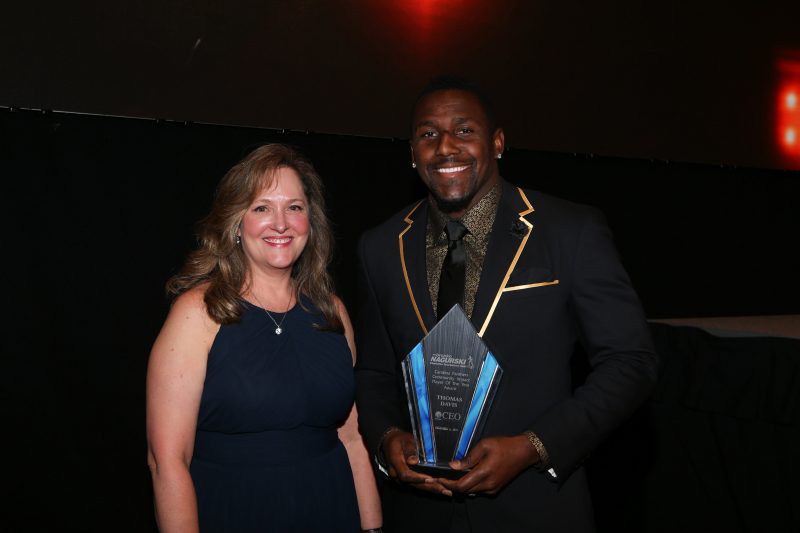 The Carolina Panthers Impact Player of the Year Award was created to honor a Carolina Panther player who has dedicated his time and talents to making a significant difference in the community. The Charlotte Touchdown Club wished to honor a player that exemplifies the principles of character, integrity, excellence, and teamwork by motivating and inspiring his teammates and others around him to accomplish more than they would have normally. It is our great pleasure to announce that the recipient of this award is #99 Kawann Short.

Kawann Short was born February 2, 1989 in East Chicago, Indiana. He attended East Chicago Central High School where he was a two-sport athlete playing football and basketball. In 2007, Kawann helped lead the East Chicago Central Cardinals basketball team to an Indiana 4A State Championship. He completed his high school career as an Indiana Football All Star selection, number 24 defensive tackle in the nation and number 6 recruit in Indiana by Scout.com.

Kawann attended Purdue University in West Lafayette, Indiana. In his first year of action he earned the teams Newcomer of the Year award, was named to the Big Ten All-Freshmen Team and Freshmen All-American by CollegeFootballNews.com. Short finished First-Team All-Big Ten and Second Team All American. Kawann graduated from Purdue University with a bachelor’s degree in Organizational Leadership and Supervision and entered the 2013 NFL Draft.

Kawann was drafted in the second round with the 44th overall pick by the Carolina Panthers in the 2013 draft class. Picking up where he left off, Kawann was considered a stand out rookie. In 2014, Kawann took over a starting role and finished ranked as the 3rd best interior linemen according to Pro Football Focus. In 2015, a breakout season for Kawann, he led the Panthers defense and all NFL interior linemen in sacks with 11. He was awarded the Defensive Player of the Month twice, becoming the first interior linemen to ever do so. He was selected to Pro-Bowl, named second team All-Pro, and led the Panthers to a Super Bowl appearance. His success on the field inspired him to do even more work off the field.

Kawann partnered with Athletes for Charity early in his career. Through their partnership, they were able to host several charitable events and activities in Charlotte, NC and East Chicago, IN. In 2016, Kawann began hosting his annual youth football camp in East Chicago, Indiana. He has since expanded his charitable vision and direction. In early 2018 Kawann initiated the development of Kawann Short Charities, a non-profit dedicated to exposing, empowering, and encouraging the lives of underserved communities through education, athletics, and the arts. Kawann appreciates his success and uses his platform to aid and assist in the progression of the communities that have helped mold him into the man he is today.