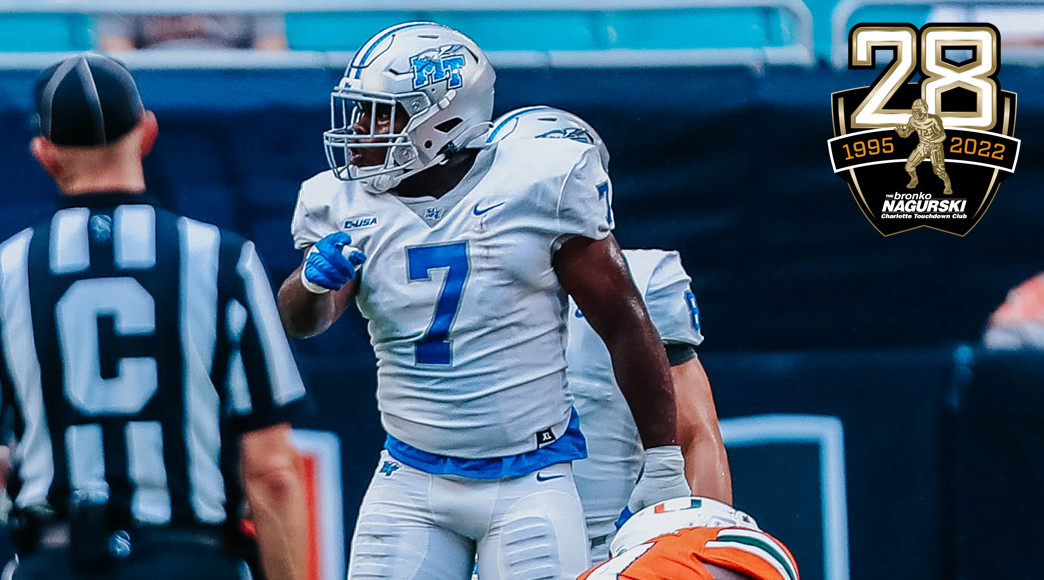 DALLAS (FWAA) – Middle Tennessee set a commanding tone with interceptions on two of No. 25 Miami’s first three offensive plays, while Zaylin Wood started his own career day by taking the second one back 15 yards for a touchdown as the Blue Raiders came out of Miami’s Hard Rock Stadium with a 45-31 win. For his outstanding play in guiding MTSU to its first win over a ranked team, Wood earned the Bronko Nagurski National Defensive Player of the Week honor for games during the weekend of Sept. 24, as selected by the Football Writers Association of America.

Wood, a 6-1, 280-pound redshirt sophomore and two-year letterman from Bowdon, Ga., had a career-best 2.0 sacks to go with 2.0 tackles for loss, a fumble recovery and the interception he turned into a touchdown, his first career score on defense that gave MTSU a quick 10-0 lead just five minutes into the game. MTSU had already picked off one pass on Miami’s first play, the second time in three weeks the Blue Raiders had an interception on their opponent’s first play of the game. Wood’s interception gave the Blue Raiders their third straight game with at least two interceptions.

Wood, who started for the second time at left defensive end, and the play of the Blue Raiders’ defensive front has been essential in their current three-game win streak. The sacks and TFL’s against Miami were Woods’ first of the season and he has eight total tackles this season. MTSU has allowed just 111 total yards on the ground during the win streak and leads C-USA and is 22nd nationally giving up just 93.0 rushing yards per game. Wood and MTSU are No. 2 nationally in sacks (16.0) and in the top 10 in five other defensive categories.

MTSU entered the game 0-21 against ranked foes since joining the FBS ranks in 1999.