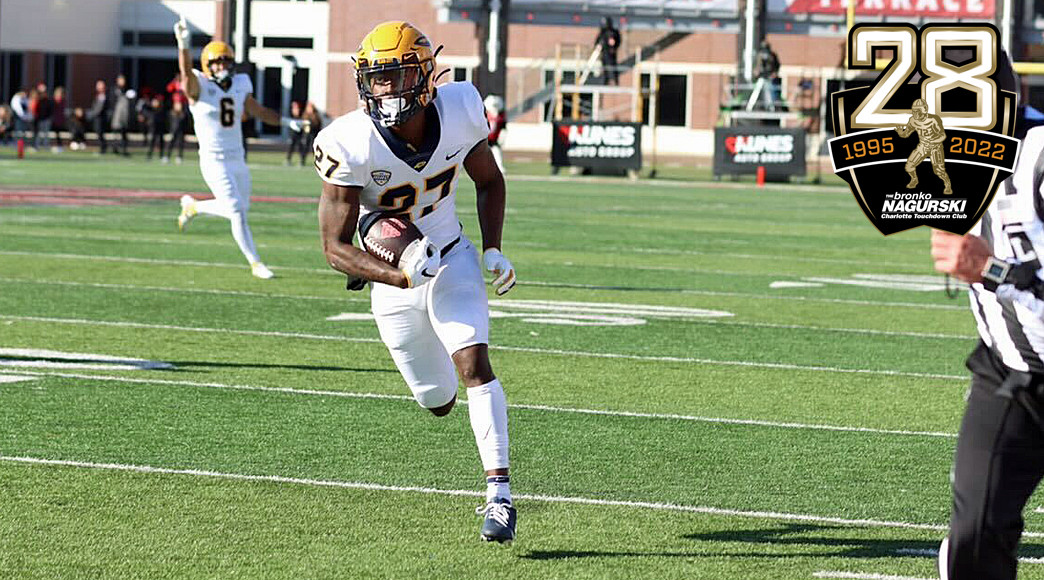 DALLAS (FWAA) – Toledo cornerback Quinyon Mitchell intercepted four NIU passes, returning two of them for touchdowns that led the Rockets (4-2) to a 52-32 road win in DeKalb, Ill. For the dynamic and game-changing takeaways, Mitchell earned the Bronko Nagurski National Defensive Player of the Week honor for games during the weekend of Oct. 8, as selected by the Football Writers Association of America.

A 6-0, 200-pound sophomore from Williston, Fla., Mitchell had three interceptions by halftime, the first of which he scored with from 25 yards out to give Toledo at 14-0 lead. He took the second into the end zone as well, from 20 yards away three minutes before halftime. The third came in the final seconds before the half in Toledo’s end zone to thwart an NIU drive and preserve a 35-7 Toledo halftime advantage.

This is the second time for a Toledo player to earn the weekly Bronko Nagurski award and the first since free safety Tyrrell Herbert earned it the week of Oct. 14, 2008.

The four interceptions tied the Toledo record set back in 1950 — Jerry Palmer had four against Western Reserve – and marked the first time a Rocket had two pick-sixes in one game. Mitchell is the only FBS player since 2000 with four interceptions and two pick-sixes in a game. The NCAA record for single-game interceptions is five, held by four players, most recently Dan Rebsch of Miami (Ohio) vs. Western Michigan in 1972, which is the Mid-American Conference record.

The Rockets, now in sole possession of first place in the MAC West Division, host Kent State (2-4) at 3:30 p.m. ET Saturday on ESPN-Plus.