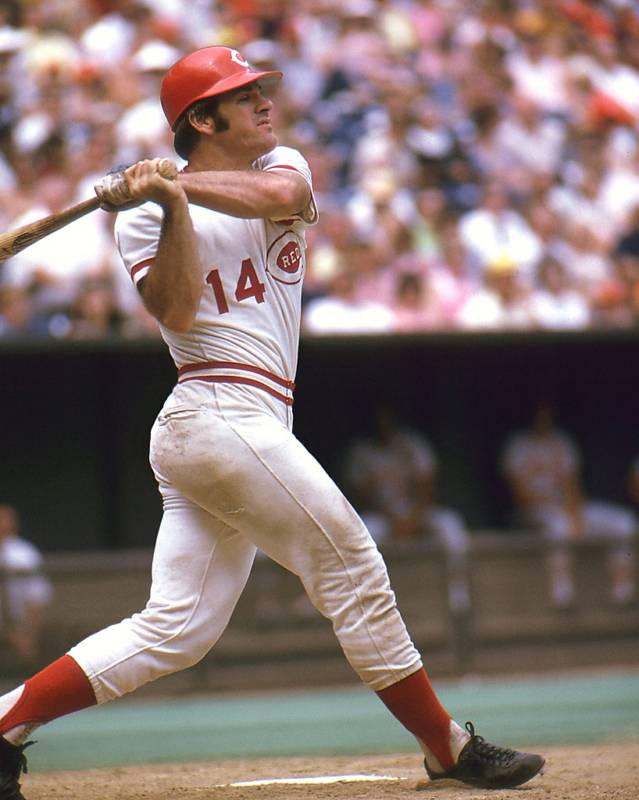 Charlotte, N.C. – The Charlotte Touchdown Club is excited to announce MLB All-Time Hits Leader, Pete Rose, as one of this year’s luncheon guest speakers.  The 2018 Speaker Series Luncheon will be hosted Thursday, September 27th at the Sheraton Charlotte Hotel.  The event will be hosted in the Sheraton’s grand ballroom from 12:00pm to 1:30pm.  An estimated sell-out crowd of more than 750 people is anticipated.  (Silent Auction from 11:15am to 11:45am)  Proceeds benefit the Touchdown Club Scholarship Fund!

Pete Rose played in more games, had more at-bats and more career hits (4,256) than any other player in MLB history.

A perennial fan favorite and 17-time All-Star known for his hustling style, Rose appeared to be a lock for the Hall of Fame, until allegations of his gambling on baseball games resulted in a lifetime ban from the sport.

Peter Edward Rose was born April 14, 1941, in Cincinnati, Ohio, one of four children to Harry Francis “Pete” and LaVerne Rose. Rose played both football and baseball at Western Hill High School and, shortly after his graduation in 1960, signed with his hometown Cincinnati Reds.

Over the next few seasons, Rose steadily improved his game, hitting .330 for the Macon Peaches in 1962 and putting himself in position to be promoted to the Reds, should the opportunity arise.  The following spring, when regular second baseman Don Blasingame pulled a muscle, Rose stepped in, and he never relinquished the position.

Rose began his career 0-for-11, but tripled against the Pittsburgh Pirates on April 13, 1963, for his first major league hit. Rose went on to hit just .273 for the season but still was the runaway winner for National League Rookie of the Year.

In 1964, it looked as though perhaps Rose was just a flash in the pan. He struggled at the plate, hitting just .269 on the season, and, in fact, was benched for nearly a month in mid-August for his lack of performance. But Rose did finish the season on a high note, batting .310 over the last 20 games of the season, and earning himself a second chance.

For the next nine seasons, Rose never looked back. From 1965-1973, Rose hit .320, averaging 205 hits per season. Rose finished in the top 10 in MVP voting seven times during that nine-year stretch, winning the award outright in 1973 with a .338 batting average and 230 hits.  Rose’s versatility was also on display, as he played multiple positions for the Reds: all three outfield spots, second base, third base and even a fill-in appearance at first base.

One of the most infamous plays in All-Star history involved Rose. In 1970, in a game played in Cincinnati’s Riverfront Stadium, the game was tied headed into the 12th inning. Rose singled and eventually moved into scoring position. When Jim Hickman of the Chicago Cubs singled to center, Rose came barreling around third base towards home plate. Though the throw had no chance to get him, Rose collided squarely with Cleveland Indians’ catcher Ray Fosse to score the winning run.  Fosse was never the same player, having suffered a separated shoulder in the collision. But it was Rose who ended up missing three games with a bruised knee from the incident — Fosse actually did not miss any action, as his injury went undiagnosed at the time.

The Reds had become the team to beat year in and year out, but, despite making it to the World Series in 1970 and 1972, and back to the playoffs in 1973, they had yet to win a World Series. That changed in 1975, when, after a 108-win regular season, the Reds engaged in a classic seven-game battle with the Boston Red Sox. Rose hit .370 for the series and was named the World Series MVP.

The following season, Rose and the Reds swept through the postseason, going a perfect 7-0 en route to a second straight championship.

On May 5, 1978, Rose became just the 13th player in major league history to join the 3,000 hit club with a single against the Montreal Expos. But that hit would prove just a prelude for the exciting roller-coaster ride to come.  Rose went 2-for-4 on June 14 against the Chicago Cubs and proceeded to hit safely all the way through the end of July. The hitting streak finally ended after 44 games — tying the existing National League record of Willie Keeler — on Aug. 1 against the Atlanta Braves.

At the end of that 1978 season, Rose became a free agent, and, in large part due to the media attention given his hitting streak, he decided to see what the market would bear.

Rose, 37, signed a four-year deal worth $3.2 million with the Philadelphia Phillies, making him the highest-paid player in the game at the time. Because Mike Schmidt was firmly entrenched at third base, Rose became the team’s everyday first baseman. Rose was the final piece to the puzzle, and in 1980 — his second season with the team — the Phillies won the World Series for the first time in franchise history.

Rose stayed with the Phillies through the 1983 season, when they once again played in the World Series, losing to the Baltimore Orioles in five games. But at the age of 42, and with a regular season batting average of only .245, his better days were clearly behind him. Unwilling to accept a backup role with the Phillies, the team released him after the 1983 season.

Rose signed with the Montreal Expos and on April 13, he doubled off Jerry Koosman to join Ty Cobb as the only members of the 4,000-hit club.

On Aug. 15, the Cincinnati Reds decided to reunite with Rose and made a trade to get their hometown hero back — not only as a player, but also as the team’s manager. Reinvigorated by the deal, Rose hit .365 the remainder of the season, and kept the team out of the NL West cellar as well.  In September 1985, with media scrutiny once again squarely aimed at Pete Rose, the player-manager made baseball history. With a single off San Diego Padres’ pitcher Eric Show, Rose passed Ty Cobb to set the all-time hit record with base hit No. 4,192.

After playing in just 72 games in 1986 at the age of 45, Rose called it quits as a player. His final hit total of 4,256 becoming the new benchmark for players to pursue.

Rose remained the manager of the Reds until Aug. 24, 1989.  Allegations of Rose having bet on baseball came to the attention of, Bart Giamatti, now the Commissioner of the sport. He retained John M. Dowd to investigate the claims. The Dowd Report revealed evidence that Rose had bet on baseball games regularly and repeatedly, including 52 games involving the Reds in 1987. Although no evidence showed Rose ever bet against the Reds, the impropriety was enough that Giamatti felt he had no choice but to ban Pete Rose from baseball for life.

Although Rose denied all charges and filed a lawsuit, on Aug. 24, 1989, Rose voluntarily accepted permanent placement on the sport’s ineligible list. As a result, despite his on-field accomplishments, Rose was ineligible to be elected to the Hall of Fame by the Baseball Writers Association of America.

In 1992, Rose applied for reinstatement with Fay Vincent, and again in 1997 with Bud Selig. The Commissioner’s Office did not act on either application.

Rose published a book in 2004, “My Prison Without Bars,” where he finally admitted to having bet on baseball games, though he firmly denied ever betting against his own team. Rose publicly stated that he finally made the admission in the hopes of being allowed to return to the sport’s good graces.

Despite the public admission of his transgressions, Bud Selig said he saw no reason to lift Rose’s lifetime ban.

One of Rose’s trademarks was sprinting to first base after being walked. Yankees pitcher Whitey Ford sarcastically dubbed Rose “Charlie Hustle,” and the nickname stuck.