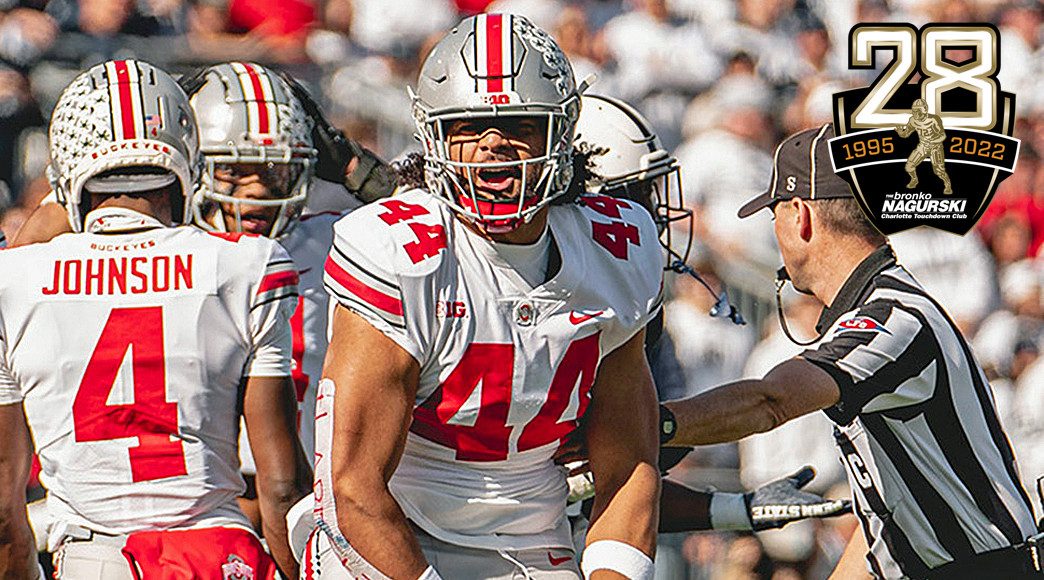 DALLAS (FWAA) – Ohio State defensive end JT Tuimoloau notched one of the most dominant games for a defensive lineman in recent seasons Saturday in Ohio State’s 44-31 win at Penn State. Tuimoloau had six tackles, three for loss, two sacks, two interceptions and a pass breakup, forced a fumble and recovered another one as the Buckeyes rallied to stay perfect in Big Ten play. For forcing four takeaways that led to 21 Ohio State points, Tuimoloau earned the Bronko Nagurski National Defensive Player of the Week honor for games during the weekend of Oct. 29, as selected by the Football Writers Association of America.

The 6-4, 270-pound sophomore from Edgewood, Wash., was a terror to the Penn State offense from start to finish. His tipped pass on Penn State’s first possession was intercepted and led to a touchdown. He intercepted his own tipped pass on the Nittany Lions’ following possession. Then, with Ohio State leading 23-21 midway through the fourth quarter, Tuimoloau had a sack and forced a fumble that he recovered, leading to another OSU touchdown on the next play.

Later in the quarter came the final highlight when Tuimoloau intercepted a pass and returned it 14 yards for a touchdown to extend the Ohio State lead to 44-24.

This is the sixth time for an Ohio State player to earn the weekly Bronko Nagurski
award and the second time this season, as linebacker Tommy Eichenberg won it following the opening Sept. 3 weekend of games. Prior to that, Chase Young (2019) and James Laurinaitis (2006) each earned weekly awards before winning the Bronko Nagurski Trophy at the end of those seasons. Chimdi Chekwa (2010), Laurinaitis (again in 2007) and Bobby Carpenter (2005) also won past weekly awards.

Through eight games, Tuimoloau has 15 tackles – ninth on the team – with 6.5 tackles for loss and 2.5 sacks. He has started in two of OSU’s last three games. He’s 11th in the Big Ten in tackles for loss and sixth among defensive linemen. His four quarterback hurries are second on the team, just one behind Zach Harrison’s five. The 3.0 TFL’s at Penn State ties him for the top mark in a Big Ten conference game this season and the 2.0 sacks tie for second among conference games. Tuimoloau is now tied for third in the Big Ten with 2.5 sacks.

Ohio State, ranked No. 2 nationally and tied for the Big Ten’s East Division lead at 5-0, travels to Northwestern for an 11 a.m. CT game Saturday on ABC.