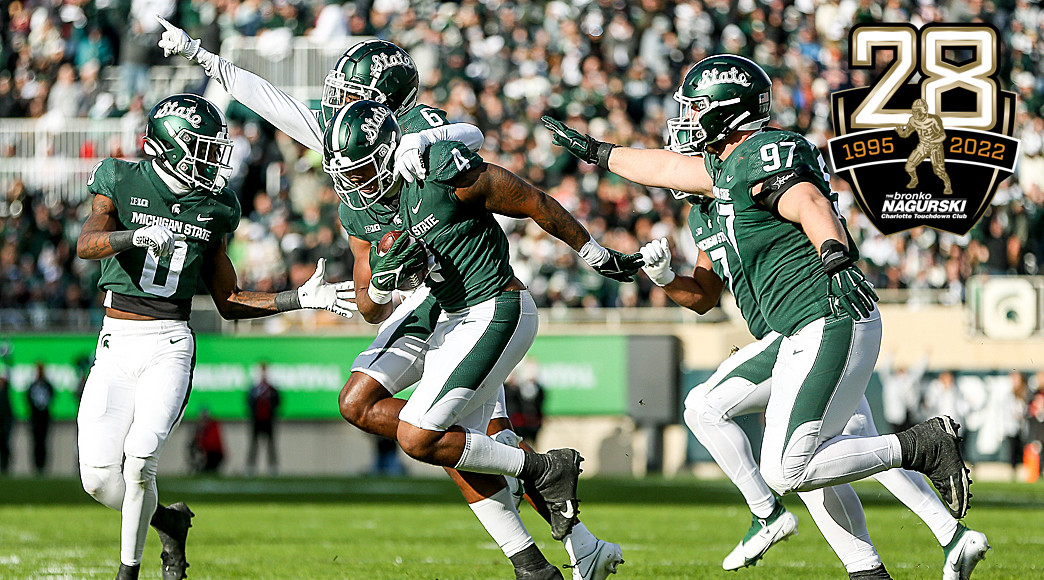 DALLAS (FWAA) – Jacoby Windmon turned last Saturday’s game in Michigan State’s favor twice last Saturday, the second time in overtime in forcing a Wisconsin fumble that the Spartans recovered and later scored to take an important 34-28 Big Ten win in East Lansing. Windmon forced both Badgers turnovers with an earlier interception to go with his season-best 11 tackles to earn the Bronko Nagurski National Defensive Player of the Week honor for games during the weekend of Oct. 15, as selected by the Football Writers Association of America.

In his first start at linebacker – the previous six came at defensive end – the 6-2, 250-pound senior from New Orleans, La., also posted two tackles for loss. The first-quarter interception was the first of his career and led to Michigan State’s first touchdown. He is the first MSU player to record double-digit tackles, an interception and a forced fumble in the same game since Joe Bachie in 2017 at Michigan.

This is the third time for a Michigan State player to earn the weekly Bronko Nagurski award and the first since safety RJ Williamson earned it the week of Sept. 19, 2015. Shilique Calhoun earned it as well in 2013. The Spartans also boast cornerback Darqueze Dennard as a Bronko Nagurski Trophy finalist in that 2013 season.

Windmon, who has been the Big Ten’s Defensive Player of the Week three times this season including in back-to-back weeks for games Sept. 3 (Western Michigan) and Sept. 10 (Akron), leads the conference with 10.5 tackles for loss and is second in the conference with 5.5 sacks. He leads the FBS with six forced fumbles – three more than any other FBS player through seven games. His 10.5 TFLs are tied for eighth in the FBS and his 5.5 sacks are tied for 18th.

Overall, Windmon is sixth on the team with 37 tackles to go along with two pass break-ups, an interception and a fumble recovery. The six forced fumbles are already tied for second-most in a school season. He is the first Spartan defensive player to win the conference’s weekly honor three times in a single season and only the sixth Big Ten player to earn as many.

Windmon transferred to Michigan State from UNLV in time for spring practice after earning All-Mountain West Conference honors twice as a second-team choice in 2021 and honorable mention in 2020. He had 169 career tackles in three seasons at UNLV (2019-21), adding 18.5 TFLs, 12.0 sacks, four pass break-ups and three forced fumbles, starting in the final 18 of his 30 career games for the Rebels.

Michigan State is idle this week. The Spartans’ next game is in prime time at Michigan on Oct. 29 with a 7:30 p.m. ET kickoff on ABC.