The Defender of the Nation Award

The recipient of The Defender of the Nation Award will be selected from one of the nation’s military academies including Air Force Academy, The Citadel, Coast Guard Academy, Naval Academy, Norwich University, Texas A&M University, Virginia Tech, VMI and West Point and is based on exceptional leadership qualities on the field, in the classroom and in the community. The recipient must also exhibit a high standard of integrity by leading through example. 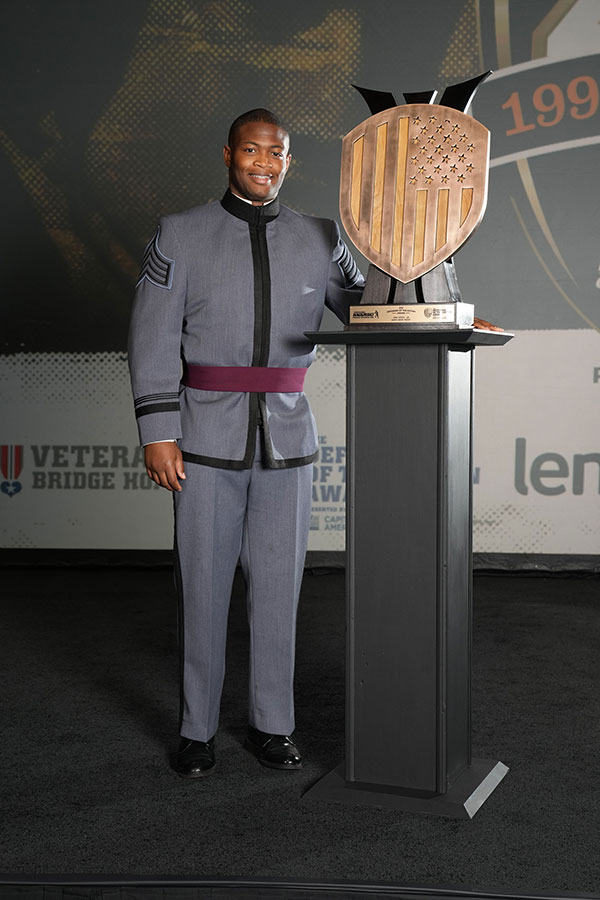 2021 DEFENDER OF THE NATION WINNER

Entering his senior season at Army West Point, Arik Smith was selected by the Black Knights as a team captain for the 2021 season. Heading into 2021, Smith anchored the No.1 ranked defense in 2020 that saw the Black Knights securing a 9-3 record and earning their third Commander-in-Chief’s Trophy in four seasons. Army also made a ninth Bowl appearance in Academy history.

With starting the nine games played by Army in 2021, the Maryland-native currently leads the team in tackles for a second-consecutive season (50). Averaging five tackles per game, Smith started the season making an impact against Georgia State with five tackles, 1.0 TFL and one fumble recovery on the first defensive drive of the game. The team currently sits at four turnovers on opponent opening drives in 2021, the most in the NCAA.

In 2020, Smith was a 12-game starter at linebacker, where he led the team in tackles (78 total), including 33 solo tackles. Smith accounted for a team-most 9.0 of the team’s 72 total TFL count.  The 2020 season also found Smith as a constant quarterback disruptor with snaring an interception among being at the top of the team ranks in sacks, marking a 3.5 total. Two of the sacks came against The Citadel in Week 5.

2019 found Smith posting 83 total tackles (39 solo), 4.0 TFL and 2.5 total sacks in his sophomore season. One of those came in a key matchup heading into the Big House against Michigan, where he ended with a seven-tackle, 1.0 TFL and one forced fumble output on the Wolverines.

Before starting for the Black Knights and becoming an impact player immediately in his 2018 freshman season, Smith joined West Point with a strive to be further sharpened by the elite. Outside the balance of heavy demands required of a Cadet at a prestigious military school, he sacrifices the limited personal time to leverage it for good. Whether it’s restoration efforts for Section 8 housing in Baltimore, speaking at national church conventions encompassing 150 churches, or actively engaging youth one-on-one to serve as a mentor – it’s all aimed to leverage change for good. 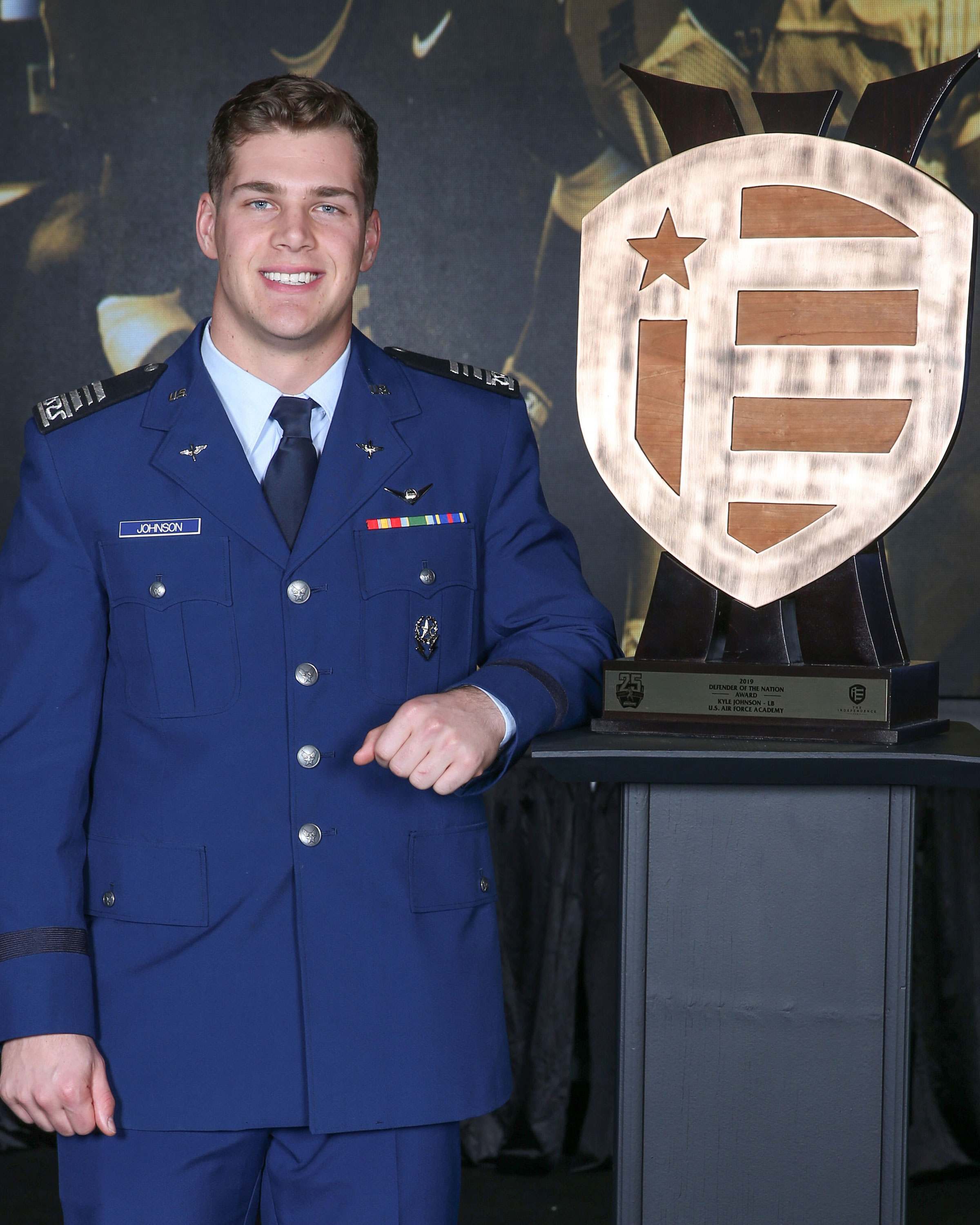 2019 DEFENDER OF THE NATION WINNER

Kyle Johnson captained Air Force’s defense during its 11-2 season with victories over Colorado and Washington State. He ranked second on the team in tackles in each of his last two seasons (152 tackles and 13 TFL over that period) and had two pick-six plays. He earned the Brian Bullard Award and was named Defensive MVP. Johnson made second-team All-Conference and was the Mountain West Male Scholar-Athlete of the Year. A finalist for the CoSIDA Academic-All American Award as a junior, he graduated as the top scholar in Management and in all social sciences at USAFA, where he was named Male Athlete of the Year. In the summers, he interned for a Washington-based think tank and SpaceX. He was commissioned as an intelligence officer in the Space Force, where he’ll serve after completing his masters degree in International and Global Affairs from Harvard’s Kennedy School of Government.

” In resounding ways, Kyle Johnson is every bit of anything we could ever desire in a Cadet-Athlete at the United States Air Force Academy,” Said Head Coach Troy Calhoun. “He’s physically and emotionally the toughest person you would ever coach, he’s an exceptional student, he’s an incredibly productive football player, and is as well respected of a teammate as one could have. The Charlotte Touchdown Club made a great choice for their 2019 Defender of the Nation Award in Kyle Johnson.” 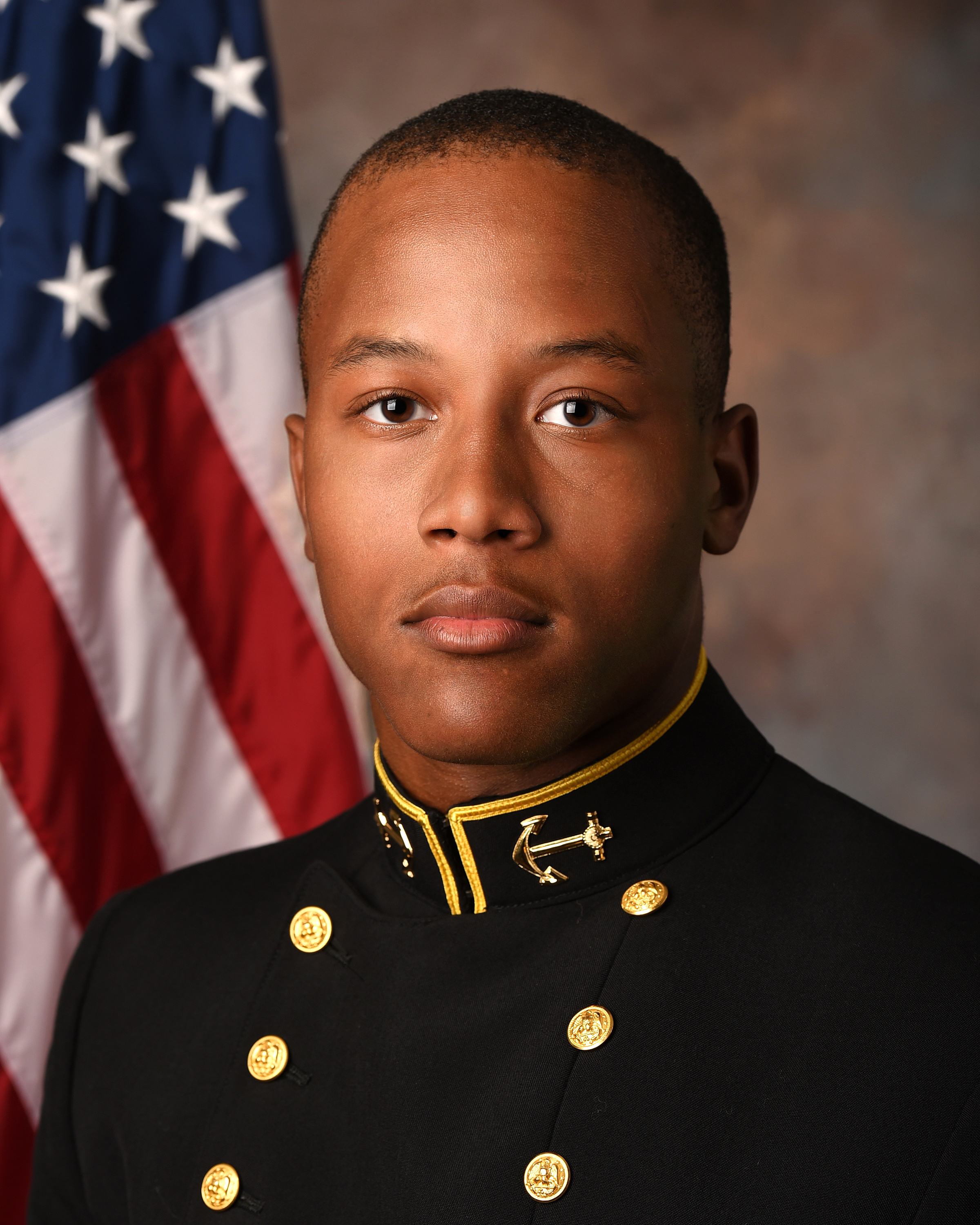 2018 DEFENDER OF THE NATION WINNER

Williams was a three-year starter for the Mids, finishing third on the team in tackles in 2018 with 85. His five forced fumbles in 2018 were tied for the second most in the FBS, while his five pass breakups and two interceptions were tied for the second most on the team. Williams won the Cooke Award, which is given to the player who has done the most to promote team spirit, and was the recipient of The Defender of the Nation Award, which is based on exceptional leadership qualities on the field, in the classroom and in the community at one of the Service Academies. Williams’ Service Assignment was Supply. 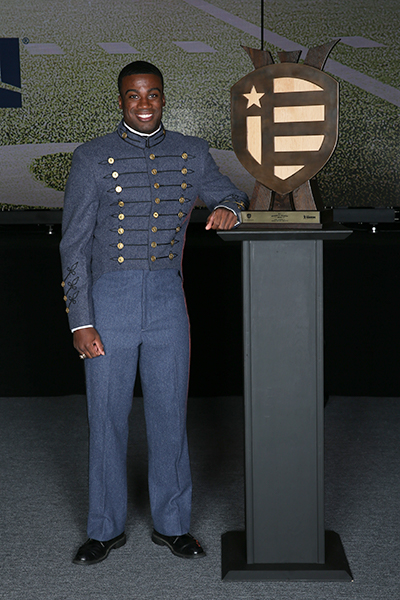 2017 DEFENDER OF THE NATION WINNER

When economics and business major Cadet Greg Sanders ’18 received his first recruiting letter from VMI, he threw it away. Even though he was from a military family – an Air Force mom and a Marine dad – the then-teenager from Memphis, Tennessee, wanted “the typical college life.” Then, he visited VMI. As someone who likes taking the road less traveled, he decided that VMI was for him. After going through the Rat line and breaking out, Greg said, there was no turning back. He was fully committed to VMI. He earned a football scholarship, played as a safety and was a team captain. After graduating from VMI, Greg became a 2nd LT. stationed at Los Angeles Air Force Base and worked at the Space and Missiles Center in the Military Satellite Communication Systems Directorate (MILSATCOM). Greg is currently stationed in Dayton, OH at Wright Patterson AFB where he is a full-time student. He was accepted in the Air Force’ 18-month long program at the Air Force Institute of Technology (AFIT) to pursue a degree in Program Management. 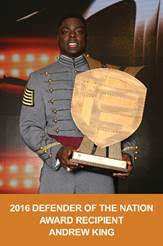 2016 DEFENDER OF THE NATION WINNER

Andrew King, a Cadet at the United States Military Academy at West Point is the recipient of the inaugural Defender of the Nation Award.  A two-year starter at linebacker, King served as Platoon Leader and Honor Officer and majored in Law and Legal Studies.  Jeff Monken, United States Military Academy Head Football Coach, commented in 2016, “Andrew is one of the finest young men I have been associated with during my coaching career.  He has the respect of everyone in the locker room as well as the Corps of Cadets for his character and his commitment to the United States Military Academy’s values of Duty, Honor, and Country.  I am extremely proud of Andrew and what he has been able to accomplish at the Academy and he is truly one of America’s best.” Andrew is now an active-duty Captain in the Army and a first-year law student at Fordham University School of Law in N.Y.C. He served from February of 2019 through May of 2021 with the 2nd Battalion, 35th Infantry regiment as an Infantry Officer where he was assigned as a rifle platoon leader and a mortar platoon leader. During Andrew’s time there, he participated in a Joint Readiness Training Center Rotation and a training deployment to Thailand. In December of 2020, Andrew was selected for the U.S. Army’s highly competitive Funded Legal Education Program (FLEP) where he received tuition funding for law school and upon graduation, will be tendered assignment in the Army’s Judge Advocate General (JAG) Corps.